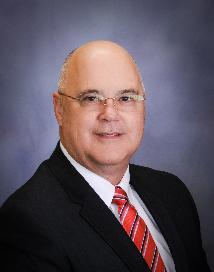 It would appear that Rep. Rod Furniss (Republican – Rigby), better known as Red Flag Rod, is upset about being called out for his stance on Red Flag laws.

Not only has he continued his path of confusion on the issue, but he is also now lashing out at gun owners.

It isn’t every day that a sitting Idaho legislator, especially a “Republican” one, makes onerous claims against Idaho gun owners.

However, in a video posted yesterday, Rep. Furniss not only muddied the issue further but made numerous false claims, including a shocker at the end of the video.

At the beginning of the video, Red Flag Rod attempts to explain what a Red Flag law is.

Of course, he fails miserably to outline the entire process which we won’t address in this article.

He also undermines the dangers of Red Flag laws and why gun owners are so opposed to them. There are a number of serious constitutional concerns with Red Flag laws that Rod should probably not ignore.

Rod also says that gun owners use Red Flag laws to lean on “distrust of the government.”

Right, what could possibly go wrong with the government confiscating guns from gun owners red-flagged by their liberal neighbors?

Maybe Red Flag Rod can talk to the sheriff in Colorado who was “red-flagged” by an inmate!

Perhaps, Red Flag Rod can talk to the dead Maryland man who was “red-flagged” by a family member he had a spat with?

Or perhaps Rod can talk to the estimated 1/3rd of people who have been wrongfully red-flagged. Of course, he won’t do that because he doesn’t care.

Rod falsely assumes all people who are denied their constitutional rights are violent criminals.

Red Flag Rod says that gun owners took his words “out of context” which couldn’t be further from the truth.

You see, Rod was asked a very direct question about his support of Red Flag laws.

He only answered with two sentences.

The first sentence in his response to the questions of his Red Flag Support was “I support the concept.” How could that possibly be taken any other way than Rod supports the concept of Red Flag laws?

Rod follows that sentence up by saying, “I need to read the bill.”

Again, this would imply that Rod supports Red Flag laws but wants to see how it is written first. 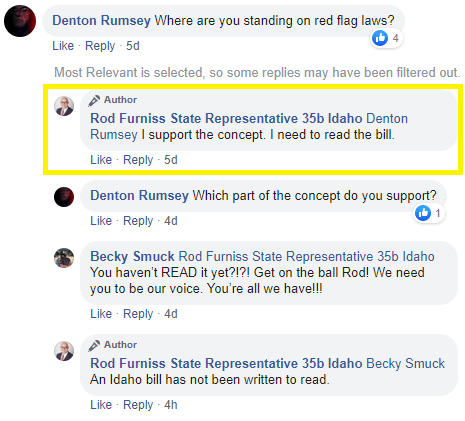 Now, Rod is trying to claim that he meant to say he supported the concept of not supporting Red Flag laws.

However, that still means leaves the other sentence that he wants to read a bill first. This would imply he may support the issue if written correctly does it not?

You either support Red Flag laws or you don’t.

Rod was called out by other gun owners and you tell us if he opposes Red Flag laws based on this response: 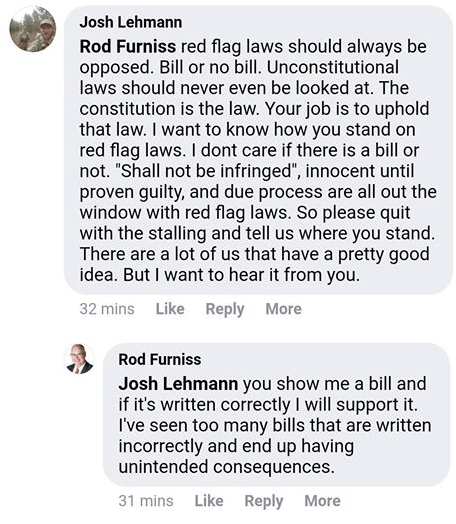 Would Rod’s response to this question/comment tell you he opposes Red Flag laws?

If Rod really does oppose Red Flag laws, then he just doesn’t know how to type comprehensive responses.

That’s somewhat concerning given his status as a lawmaker.

At the end of the video, Rod asserts that the Idaho Second Amendment Alliance and Idaho Freedom Foundation and their members support physical abuse against women and children.

He offers no evidence to support such a claim. There isn’t any of course and he knows it.

I saw my own mother get beaten by her 2nd husband firsthand as a child.

From that experience, I fully understand and have nothing but sympathy for those who go through such ordeals.

I also know that no law would have stopped her husband from doing what he did.

Nothing but a firearm of course which would have equalized her against his physical power.

Gun owners want to ensure that potential victims can defend themselves against their attackers.

This shameful lie about Idaho’s gun owners is unacceptable.

We would encourage you to reach to him and demand he apologize for what he said.

You can reach Rep. Furniss at rfurniss@house.idaho.gov.

The Gem State Heist Part 1: It's Already Begun Like it Did in Colorado
Revealed: Graf Makes Outrageous Felony Accusation Against Doyle Beck (Part 4)
Idaho Gun Owners Rally at the Capitol
Revealed: How one Melaleuca "executive" tried to get an Idaho legislator fired. (Part 1)