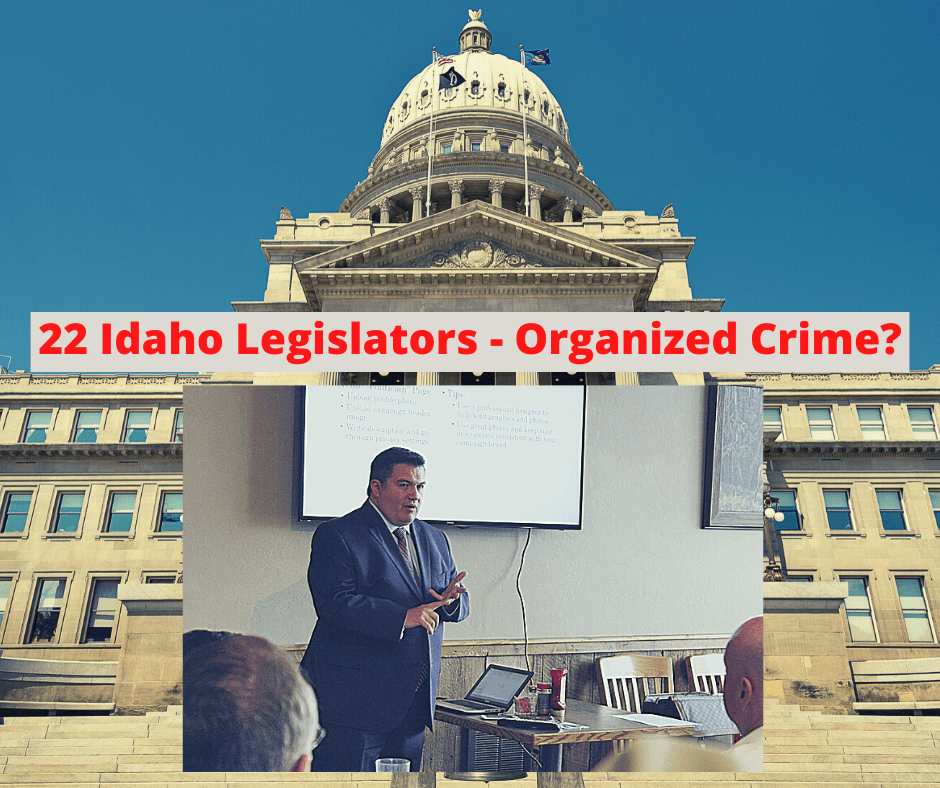 Update: Rep. Tammy Nichols has sent us the following message about this article:

I was not present at the events at the Capitol regarding the caucus meeting concerning Rep. Green, as Mr. Graf implies in his phone conversation. I was out of the state at the time this occurred. I also am not part of any “organized crime”, nor “dangerous”, nor “far-right” (whatever that means), nor any of his other legations that he states, and find his accusations of myself and others insulting and defamatory.

In recent articles, Keep Idaho Free has exposed one Gregory Graf, a political operative, for his use of — at the very least — questionable tactics to punish his political enemies.

To review, read part 1 here, where KIF details how Graf made several big, and likely false, claims about his connection to Gov. Brad Little, the Federal Bureau of Investigation, and Idaho House Speaker Scott Bedke, a Republican from Oakley.

In part 2, KIF dropped a bombshell that details how far Graf will go to inflict pain on his adversaries. In short, Graf will stop at almost nothing to harm politicos with which he disagrees. If you read any other piece in this series, make it this one. You won’t believe the lines Graf crosses to try to destroy state Rep. Chad Christensen, R-Ammon.

In this installment, KIF will show that Christensen, while Graf’s main obsession, is hardly the political hit man’s only target. And, we’ll look at Graf’s allies in the war against principled state lawmakers.

With the exception of Radford, each of the aforementioned politicians has waged war on conservatives in the past few years. Perhaps most famously, Rep. Doug Ricks, R-Rexburg, unseated Ron Nate from a District 34 House seat two years ago. Nate then defeated Raybould in the May primary and will return to the Idaho House in January.

Furniss, too, left a mark on Idaho’s political sphere with his antics and an all-out assault on gun owners and the Idaho Freedom Foundation. During the 2020 legislative session, Furniss went after the Idaho Second Amendment Alliance and couldn’t accurately portray his position on Red Flag laws. He also picked a fight with the Idaho Freedom Foundation, and was admonished on the floor for his overheated rhetoric.

Graf boasts a similar style, at least rhetorically. Of Nate, Graf, in a private phone call recorded a few weeks ago, suggests that Nate is part of a “far-right” network that somehow facilitates “organized crime.”

Graf says these legislators can be identified by simply using the Idaho Freedom Index scores and starting at the top of the list and moving your way down.

Graf boasts a rather low opinion of state Rep. Heather Scott, whom he dubbed a “domestic terrorist.”

Scott, you might remember, is a hero of the conservative class in Idaho because she won’t flinch in the face of political pressure.

The hatred from Graf doesn’t end there, though. He’s particularly obsessed with the Idaho Freedom Foundation Freedom Index scores, that detail which lawmakers support limited government and which don’t. The scorecard, modeled after the American Conservative Union’s report card, earns the name of “obedience score” from the enraged Graf.

Graf bizarrely claims that he and his crew over at IdahoConservatives.com debunked the Freedom Index score, a false claim.

In fact, the Idaho Freedom Foundation continues to publish the scorecard, which serves to educate lawmakers and average Idahoans alike about what’s going on in the Statehouse.

In essence, Graf used much of his phone calls to bash Christensen, Scott, and Nate, and take shots at gun owners and IFF. But, curiously, he doesn’t define “far-right,” or explain why that’s a bad thing.

Let’s use the metric that Graf hates most, the Idaho Freedom Index, to examine why he is disgusted with people who score high on that report card each year. The Idaho Freedom Foundation has been running the scorecard since 2013. The organization rates more than 100 bills each year. When IFF analysts rate a bill, they ask 12 questions about it. Here is a sample of the questions:

You can read the rest here.

This begs the question that Graf hasn’t answered: Why does he hate and despise people who, among other things, won’t increase the size of government, won’t hike taxes, and won’t violate the Constitution? What is so objectionable to Graf about holding tight to principles?

And keep in mind this isn’t just adherence to the Idaho Freedom Foundation, as Graf so wrongly suggests. Take a few minutes to examine the Idaho Republican Party’s platform, which outlines how GOP members ought to govern the state. You’ll see a remarkable overlap between the GOP platform and the Index. Why shouldn’t every state lawmaker score in the Index’s upper echelon?

KIF won’t make up stuff about Graf or pretend to know what’s going through his mind.  But, we wonder a few things about his hatred of principled conservatives.

These are useful, important questions, but our sense is that Graf won’t answer them anytime soon. Take from that what you will.

In our next article, we will detail yet another very serious accusation Graf levels against Doyle Beck of Idaho Falls. Beck is a well known political activist whom Graf accuses directly of funneling hundreds of thousands of dollars illegally during the May Primary election to an unnamed individual in California who then gave the money to Young Americans for Liberty.