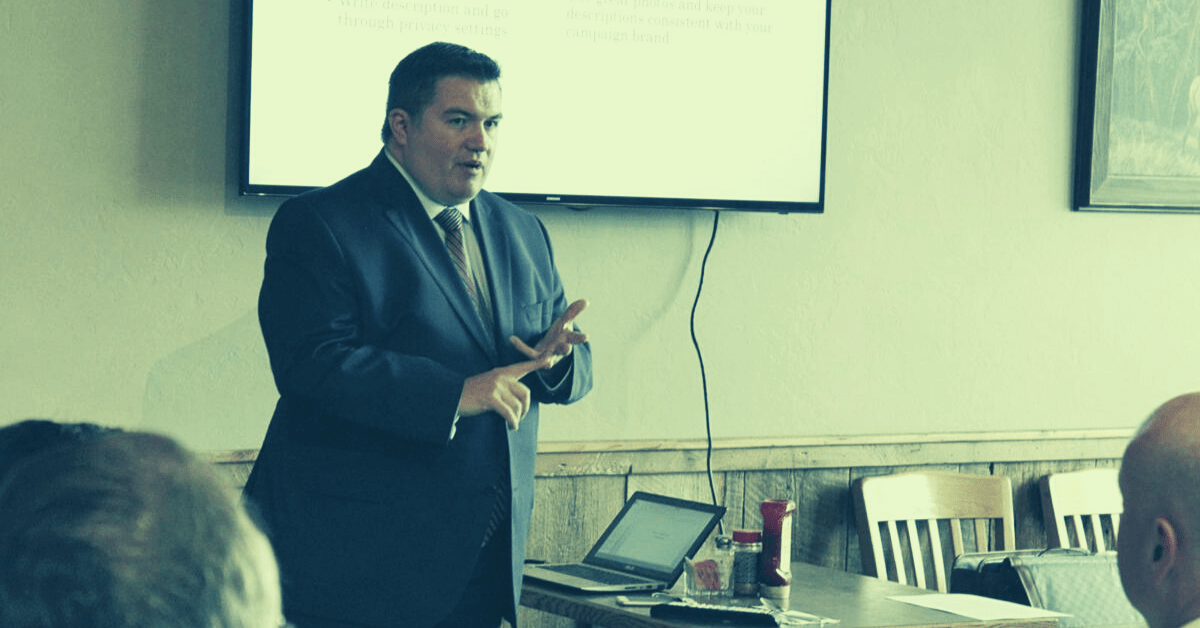 Update: Mr. VanderSloot has sent me the following message:

Hi Greg. Thanks for the heads up. That’s nice of you to let us know. I appreciate that. I have been somewhat aware of Greg’s political antics in the past. I am not aware of anything that he’s done in the last several months. We have warned Greg to leave Melaleuca out of his personal endeavors. He is entitled to his own feelings. But they are different than mine and different than Melaleuca’s. I do not agree with Greg’s approach. And he is not allowed to suggest to anyone that either I or Melaleuca condone or agree with his political position or activities.

I do not know Mr. Graff nor have I ever met him. If he is using my name or making references to me being involved in the aforementioned group, he is doing it without my knowledge or permission. I am not affiliated with the group.

A member of Melaleuca’s executive team went to unusual lengths to punish a political foe, an audio file handed over to Keep Idaho Free reveals.

In the recorded call, Graf lobs several salacious accusations at Christensen and even discusses a scheme the employer might deploy to oust Christensen from his employment.

It’s important to put Graf’s efforts in proper context. We’ll do that in this article, and then detail in the next article just how Graf attempted to smear Christensen, a Republican lawmaker from District 32.

On his carefully manicured social media pages, Graf looks the part of a corporate professional. His LinkedIn page lists him as the “Online Reputation Management & Global SEO Expert” for Melaleuca, a multi-level marketing firm based in Idaho Falls. That firm is owned by Frank VanderSloot, Idaho’s only billionaire.

It is in the shadows, in my opinion, that Graf reveals himself as something far darker. He represents the worst of American politics and incivility. In my opinion, he’s a political mercenary whose sights and skills are used to smear conservatives who disagree with Graf’s moderate political philosophy.

According to his Linkedin page, Graf specializes in reputation management, competitive intelligence, search engine optimization, and more. In the call with Christensen’s employer, Graf touts his title, and boasts that he is a member of Melaleuca’s executive office.

(Note: A previous version of this audio was edited to remove the name of an individual who works for Melaleuca and is not part of this story.)

It’s unclear if Graf’s claim to executive status is real or imagined to gain favor with Christensen’s employer.

To be sure, complaining to a state lawmaker’s employer about the legislator’s politics isn’t a heinous offense. It’s happened in the past and will continue far into the future.

What shocked the senses is just how far Graf is willing to go, and how many lies he is willing to tell, to harm Christensen and others.

For example, Graf tells Christensen’s employer that when the Federal Bureau of Investigation needs to know something in Idaho, he is the agency’s main point of contact.

Keep Idaho Free visited the Boise FBI office and shared with an employee there Graf’s story. The staffer couldn’t comment directly on Graf’s claim, but said that the claim sounds like a scam.

The Boise staffer suggested Keep Idaho Free refer the matter to an FBI tip line. KIF did submit the matter to the agency’s reporting line, but the federal bureau has not responded as of this writing.

Graf likely inserted that nugget, regardless of its veracity, to further build his clout with Christensen’s employer.

He wasn’t done there, though. No, Graf claimed his organization has close ties to several of Idaho’s political leaders, including House Speaker Scott Bedke and Governor Brad Little.

Keep Idaho Free reached out to Bedke and Little to verify the claims, but neither has responded.

For now, what’s important to understand is that this unethical tactic serves as nothing more than another front for Graf’s political operation, an apparatus built to destroy the Idaho Second Amendment Alliance, the Idaho Freedom Foundation, and any lawmakers who don’t bow to Graf’s political bullying and harassment.

And to be clear, Graf isn’t alone in the years-long offensive on those who want to limit government and protect Idaho’s way of life.

After starting a website called “IdahoConservatives.com” he quickly enlisted the help of his allies in the offensive, Stephanie Mickelsen and Jennifer Ellis. The two establishment Republicans live in Bonneville and Bingham County respectively. IdahoConservatives.com is a landing page for Graf’s unique brand of hatred, harassment, gaslighting, and manipulation.

Graf reaffirms on the call that Ellis, too, has close ties to Bedke and Little.

To be clear, Keep Idaho Free does not claim here that Bedke, Little, Melaleuca, or VanderSloot have anything to do with Graf’s unethical assault on his political foes.

In fact, in June of 2019, VanderSloot assured me that he had urged Graf to remove himself from IdahoConservatives.com. Here’s what VanderSloot wrote then:

However, several months ago we learned of Greg’s involvement with the organization called Idaho conservatives. Since we use Greg on some of our social media endeavors we asked him to cease his involvement with that organization because we were concerned that someone might confuse his personal endeavors with our own views. Several months ago Greg committed to us that he would seize his active involvement with Idaho Conservatives. We believe he has done that. That was difficult for him since he was a founder of that organization. But he has promised us that he would no longer be involved with providing content to that site. I believe he has honored that commitment.

When asked for clarification on the timeframe of VanderSloot asking for Graf’s pledge to step away from the dishonest attack website, he delivered more detail:

According to our records the exact date of our asking Greg to cease any involvement with Idaho Conservatives was January 24th, 2019. Greg came back and asked us for 30 days to unwind his involvement with them. We gave him those 30 days. That would mean his involvement should have stopped at the end of February 2019. He has consistently represented to us that he faithfully kept that commitment. I have not been paying attention to Idaho Conservatives’ site nor to your site, nor to any similar or affiliated sites so I cannot speak to some of your other comments. But, to date, we have had no reason to disbelieve Greg’s promise to us that he has not been involved with Idaho Conservatives since the end of February.

From the audio, Graf indicates that he helped write an article titled the “Foundation of Fear” which was released on April 24th, 2019. The article has the name of “Jennifer Ellis” as the author but the audio we obtained suggests Graf had at least some part in putting that article together.

The audio shared with Keep Idaho Free also indicates that Graf has not honored his pledge to step away from IdahoConservatives.com. He mentions that he is the “behind the scenes intelligence gatherer” while Ellis runs the “day to day” operations and that it is “his” organization. It’s unclear if VanderSloot, who was trying to protect his company’s brand in 2019, has given his blessing for Graf’s return to political shenanigans.

There’s far more to reveal here. Graf makes several salacious, bizarre, and untrue claims about Christensen in the call. Unbelievably and without corroborating evidence, Graf alleged that Christensen is a sexual predator. We’ll write about that in Part 2 of this series, which Keep Idaho Free plans to publish soon.

Note: Chad’s employer will sound as though she agrees with Graf during the phone call, but her intention was only to agree with Graf in order to get him to reveal his alleged claims.

7 thoughts on “Revealed: How one Melaleuca “executive” tried to get an Idaho legislator fired. (Part 1)”