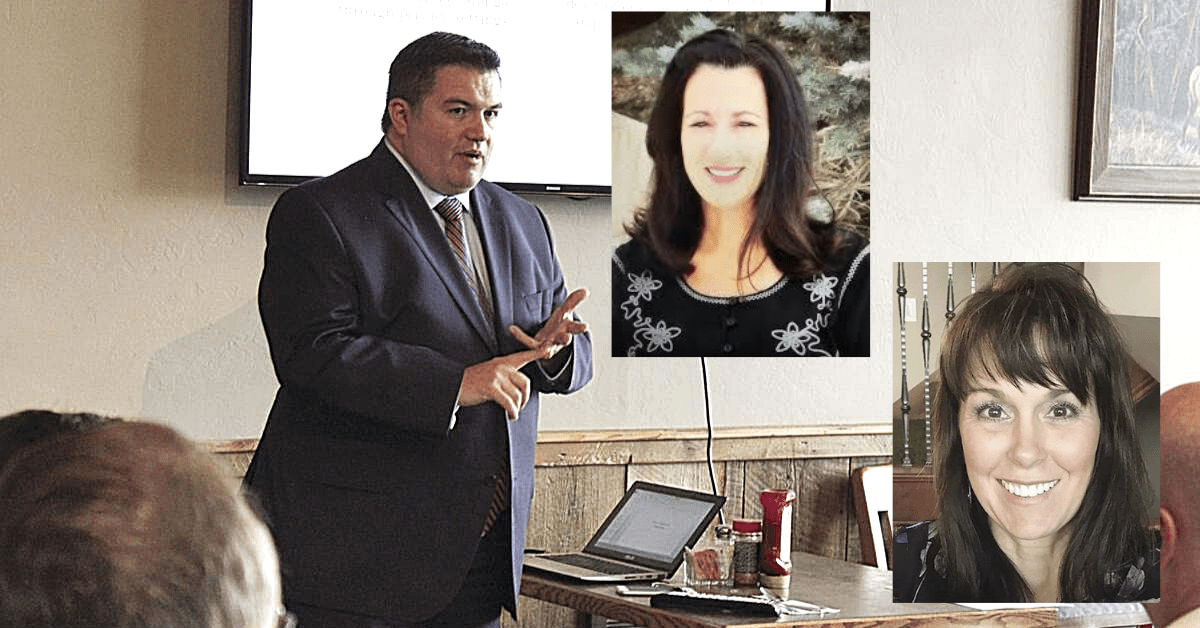 Idaho’s political sphere is chock full of backbiting, gossip, and all other sorts of treachery, deflection, and deception.

No one takes the game farther, in my opinion than one Gregory Graf. And, my guess is, you won’t believe how far this master manipulator is willing to go to punish a political enemy.

In part 1 of this series, we outlined the first step Graf, an online reputation manager for Melaleuca, took to harass state Rep. Chad Christensen: Graf called Christensen’s employer and immediately sought to build rapport with the employer; and Graf made all sorts of sensational claims, all without evidence, to gain trust with the boss.

Now, to the rest of the story.

In this article, we’ll look at how Graf violated ethical and moral norms to attempt to get Christensen fired. There are several salacious and false claims put forth by Graf. Here we go.

Claim 1: Graf accuses the state legislator from District 32 of being a sexual predator.

No, it really happened. During the recorded call, Graf told Christensen’s boss that her employee is a sexual predator. He pretends this is true, and benevolently offers a bogus story to the employer as a warning. Their office, as KIF understands it, is all-female, except for Christensen. Graf understands that, too. So, he plays the role of savior to the females with this false claim.

At this point, you might wonder if Graf knows something you don’t. Is that state lawmaker dangerous?

That’s a fair question. Let us answer it: No. How do we know?

Graf himself later admits that he doesn’t actually have any evidence to back up his claim.

This is when Graf and Jennifer Ellis hatch a new plot to get Christensen fired. More on that in a moment.

Let us first say there would be nothing wrong with Christensen aligning with the 3%. For the most part, Three Percenters, as they are known, are patriotic, humble people who care deeply about America’s future. Of course, there are some bad eggs in the basket, but that’s true of any group.

Listen to the link below to Graf’s claim that Christensen runs a “militia” group:

The problem with this claim is that it’s simply not true. Christensen has confirmed to KIF he does not, nor has he ever ran any 3% group.

Claim 3: Graf insinuates the legislator from District 32 is a racist

Ah, the old race card. Usually, people on the left pull this one. Maybe that Graf pulls this card says more about him than it does about Christensen. Unlike Graf, though, we won’t speculate!

Graf spends a lot of the phone call making wild accusations against what he calls the “far-right network” and discusses the Aryan Nations and Idaho 3% groups containing “racists” in their organizations.

Graf’s goal, in my opinion, was to convince Christensen’s employer that groups who have racists in them, or actual racist groups like the Aryan Nations are the type of groups Christensen wants to be a part of. While he makes no direct accusation of Christensen being a “racist” on the phone call, the insinuation is very obvious in addition to the many other direct attacks on Christensen.

Claim 4: Does Graf intimate that Christensen’s beliefs and rhetoric will lead to Little’s kidnapping?

First, a question: Is there anything Graf won’t say?

But seriously, this intimation is flatly false. Yes, Christensen has been a vocal opponent of Gov. Brad Little and his administration’s handling of the Covid-19 response. Still, Christensen has used his voice and platform to encourage civic action and engagement. That’s it.

Graf offers no evidence at all that Christensen has ever made such a threat against Gov. Brad Little or anyone else for that matter. It was simply another false claim that Graf tried to use to convince Christensen’s employer to fire him.

Claim 5: Graf claims that Christensen is not stable

At this point, Graf has made so many claims against Christensen that it is hard to keep track of everything he is spreading about the state lawmaker to his employer.

Insinuating someone is a racist or that they may kidnap the governor is already pretty outlandish without some sort of hard evidence to back up your claim.

Graf then says that Chad is “not stable” directly to the employer.

Who makes this type of claim without some evidence to back it up?

That’s it for Graf’s most outlandish and false claims against Christensen. But, there’s still more to this plot, as we alluded to in the beginning of this article.

After Graf’s failure to provide any evidence that the legislator from District 32 is a “sexual predator,” Graf and his friend Jennifer Ellis of “Idaho Conservatives” encourage Christensen’s boss to implement a “gun-free zone” at the office, knowing that Christensen, a principled Second Amendment supporter, would likely violate such a ban.

Graf and Ellis also suggest that the employer mandate facemasks at the office, which would also help set up Christensen for termination by his employer.

Here is what Graf tells Christensen’s boss in a text:

Did Jen [Jennifer Ellis] give you the idea about requiring masks at your office and no guns at work policy? Where I work [Melaleuca] that is the policy, no weapons and masks at all times. Nobody can fault you for taking safety seriously.

Graf then follows that text message up with an additional text about giving Christensen’s boss cover for implementing a “gun-free zone”:

You could approach this a[s] you to be more aligned with what larger companies in Idaho Falls are doing and you want to take covid and safety seriously. Regardless of the situation, it’s still not a bad thing to do anyway.

This plan is not only disgusting but is certainly not something a conservative or Republican would ever push.

Another shocking revelation from the phone call is when Graf also admits that someone from the Idaho Conservatives group may have been at least partially responsible for getting Chad fired from his previous job at Farm Bureau.

Stephanie Mickelson, who was named in our previous article as a member of the Idaho Conservatives group, is a board member at Farm Bureau. Graf claims on the phone call that Stephanie raised “red flags” about Chad when he was hired on to the Farm Bureau team. It is unclear at this time what role Mickelson may have played in Christensen’s termination from Farm Bureau.

Fast forward to today and now the group is targeting Chad’s new employer. Will this “Idaho Conservatives” group ever let Christensen live his life or do they intend to get him fired from every job he gets and will they do even more to try and make it happen?

Despite these outlandish claims against Rep. Christensen, Graf wasn’t done yet with his attacks on those he calls the “far-right.” He also says that 22 Idaho legislators are like a “mafia” and that they are part of a dangerous and organized crime network. He also names a number of legislators and other candidates for public office he says he “advised.” We detail all of that in Part 3.

The letter is pictured below: 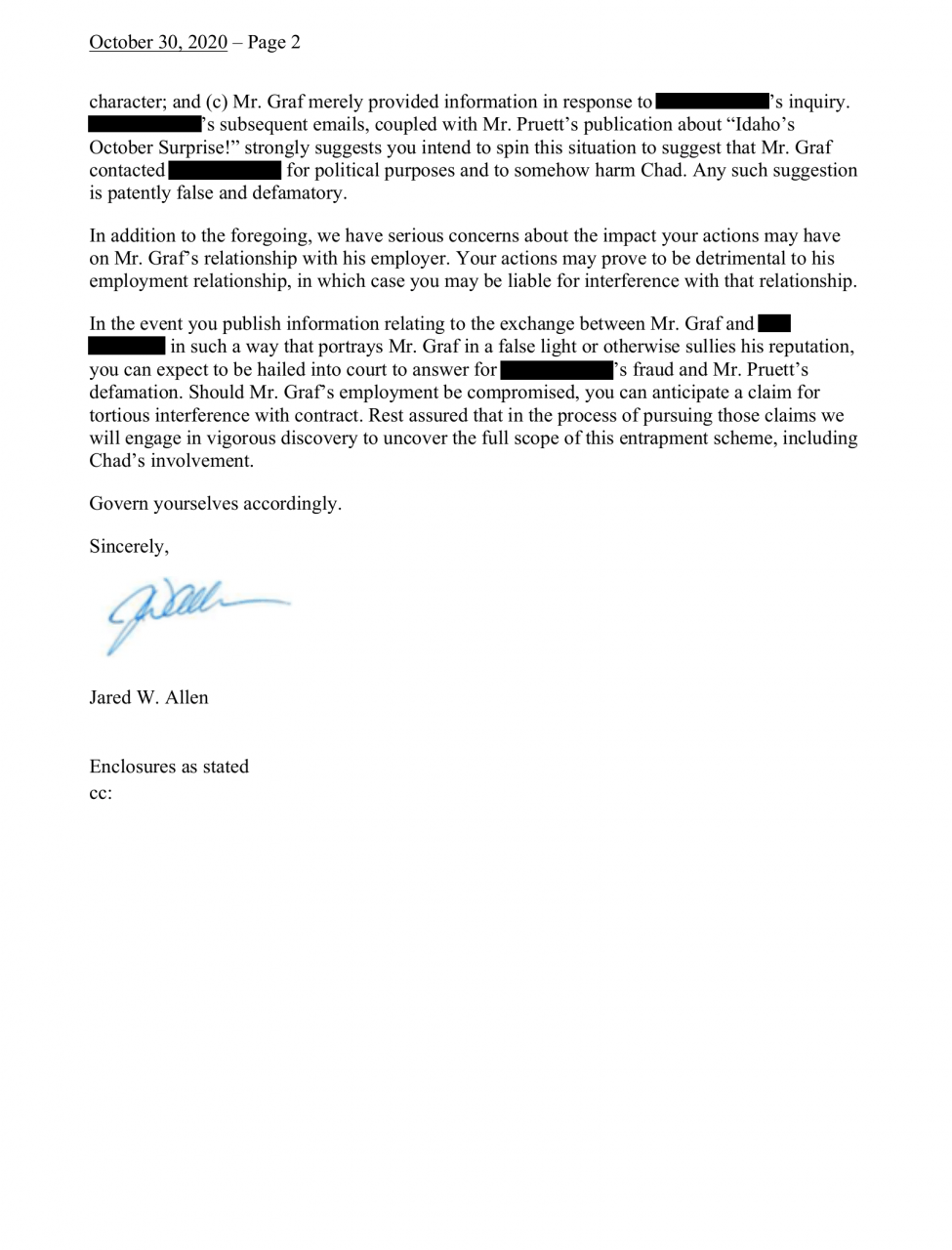