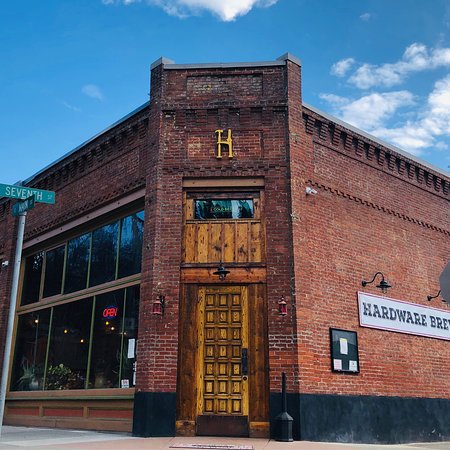 Desperate for money to take care of their family, they had no choice but to open earlier than Gov. Little’s recommended opening date.

Law enforcement visited the business twice as of 5 p.m. Friday.
Christine Lohman, who owns Hardware Brewing Co. with her husband, Doug, said a Latah County Sheriff’s Office deputy stopped by prior to the business opening at 4 p.m. asking if the owners understood the governor’s order. She said she told the deputy they did and he left.

Idaho State Police Detective Jake Schwecke had a somewhat lengthy discussion with the owners around 4:30 p.m. Political officials stood nearby and some appeared to engage in the conversation as well.

Schwecke told the Moscow-Pullman Daily News that he told the owners they were in violation of the governor’s order and that he was not going to interfere physically with them.

“At the end of it, the consequences for him (Doug Lohman) are his choice,” Schwecke said. “The lieutenant governor’s here. What are you going to do?”

But her business is a “destination place,” she said, relying on customers driving from as far away as Moscow, Lewiston and Grangeville to enjoy the business’ atmosphere — not wait in their cars at the curb for a hamburger.

“They come here to enjoy the ambience, see the brewery, play some shuffleboard, enjoy the music and, you know, commune with family and friends,” she said.

Lohman said her business has earned one-sixteenth what it does when it is fully open. She said booking events at the brewery is a huge part of her earnings, but those events have been canceled.

Lohman and her employees, who Lohman said were volunteering Friday because she could not afford to pay them, wore masks and servers wore gloves. Most patrons did not wear face coverings and did not practice social distancing. Hand sanitizer was available at tables.

Lohman said she is not going to police her customers, but law enforcement can.

“I’m not the Gestapo,” she said. “They’re all intelligent, critical-thinking adults. If they want to wear a mask, they’re welcome to.”

Lohman said she is behind on all of her bills and she and her husband have yet to receive unemployment assistance.

“We are going broke,” she said. “The mortgages are mounting, everything’s mounting. I can’t pay Avista. … We had to open.”

Under Little’s four-stage approach, Lohman’s business would be able to open either May 16 (Stage 2) or June 13 (Stage 4) at the earliest. Lohman said she did not know which date because it depends on if her business is classified as a restaurant or bar.

Under Stage 2, restaurant dining rooms can open once their plans have been submitted for approval by local public health districts. In Stage 4, bars and nightclubs can operate with diminished standing-room occupancy, where applicable and appropriate.

Lohman said all businesses should be allowed to open now.

“We need to be allowed to work and survive,” she said.

Lohman said elderly people and those with compromised immune systems should protect themselves because they are most at risk for death from the virus, but the rest of the population should be able to work and make their own decisions.

“These people are healthy,” she said. “They’re adults. There’s something called liberty and they should have the right to make their own personal choices.”

McGeachin said she traveled to Kendrick from Boise after the Lohman’s invited her to their opening.

“I wanted to show them my support for their effort.”

She said the state should provide guidelines — not mandates — for people to follow during the pandemic.

“People can manage themselves and we know how to take care of our customers, our employees, our business,” McGeachin said. “We don’t need the government to mandate things.”

She said she is thankful Little lifted the stay-at-home order, but she is deeply opposed to the government deciding which businesses are essential and nonessential.

“It’s been frustrating because I have tried to convey as best as I can (to Little) the frustration and the anxiety that I sense from people all over the state and to convey how important it is that we try to do something to help the average person who’s been suddenly unemployed,” McGeachin said.

Since mid-March, Idaho has seen 117,811 people file for unemployment as of Thursday.

That’s twice the total number of initial claims filed in all of 2019, according to the Idaho Department of Labor.

McGeachin said contrary to what Little said in his news conference Thursday, people are not receiving their unemployment checks.

She said she owns a pub in Idaho Falls and of the 22 employees she laid off, 15 have filed for unemployment and one has received a check.

“They want to just get back to work and help provide for their families,” McGeachin said. “It’s that simple.”

You can see a screenshot of her post here. 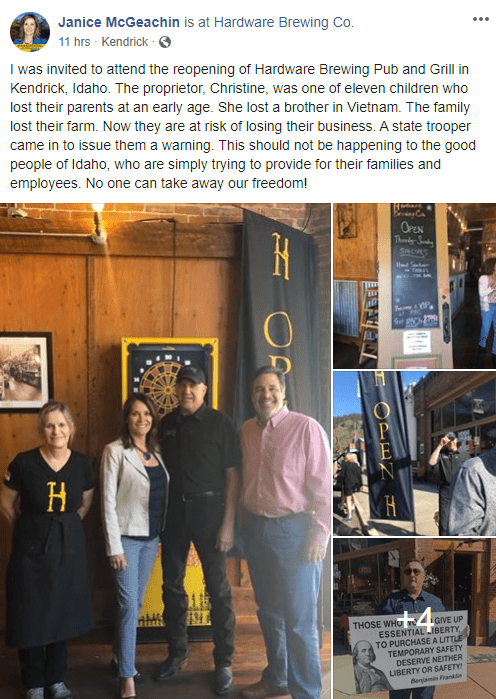 Would you open your business early if it meant not losing it?

Let us know in the comments below.