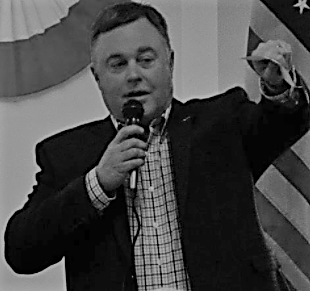 In a state that takes its 2nd Amendment rights very seriously, it is astounding to see some “Republican” candidates attack champions of gun rights.

Oscar Evans seems to have no issue doing just that.

He has had a series of disparaging and disgusting attacks on one of the most pro-2nd Amendment legislators in Idaho!.

An odd strategy for someone wanting to become a Republican legislator in a pro-2nd Amendment District.

Before we get to what Oscar said, a little history on his bitterness towards Rep. Zito.

You see, in 2018 Oscar tried to challenge Rep. Zito for her legislative seat in the 2018 Republican Primary.

This shellacking took place despite Oscar outspending Rep. Zito by over $10,000 and having establishment groups and legislators spending money to try and help him win as well.

Oscar was bitter after the election and inferred that Rep. Zito was a witch and that her supporters were “flying monkeys.” 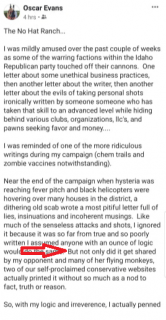 Over a year after the election and this potential District 23 legislative candidate is still attacking Rep. Zito.

In a recent Facebook post, Oscar said that passing a pro-gun bill would require legislators capable of leading and influencing others. 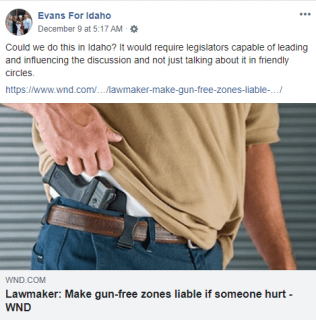 When Idaho Second Amendment Alliance President Greg Pruett pressed Oscar to name names, he responded by telling Mr. Pruett that anyone who sponsors/cosponsors ISAA legislation would fit in the category of being “leaderless.”

So, despite the successful efforts of the ISAA and Rep. Zito in pushing a solid pro-gun agenda, he is calling her leaderless on the issue!

He followed up that insult by also saying that Rep. Zito, who drives all over her District to meet with constituents, is not a great sacrifice.

Rep. Zito is well-known for being available to her constituents and willing to listen and meet with them. She is known as a fighter for gun rights and for her relentless fight to protect liberty in the state of Idaho.

Perhaps the biggest questions for Oscar are: If you think Rep. Zito is a leaderless witch, how pathetic are you for getting your butt kicked by her in the election? What does that say about how people feel about you?

Oscar, a self-described moderate, would be nothing more than a “yes man” in the capitol. Whatever Republican leadership tells him to do, he’ll do it. Clearly that is not what the voters in District 23 wanted when he tried to challenge Rep. Zito.

Idaho is blessed to have a real leader like Rep. Zito in their corner.

Rep. Zito is currently preparing to run for State Senate in District 23.

If you wish to contact Rep. Zito or contribute to her campaign, you can visit her website at http://christyzito.com/